My work is street photography in sharp b&w. It is also straight photography as I do not like to tamper with the representation of reality. I pursue pure narrative in the faces and body language of people. Being myself part of everyday life, in any and every place I go, I chance upon shots which are more honest and sympathetic than perfect. [Shots by Giacomo Marco Valerio]

HOW I BECAME A PHOTOGRAPHER

I began to see photography in a professional perspective in 2006. Before, I had used an analog camera when traveling and as a university student in Milan, at parties, to document fragments of time in a wild and disorderly way that is still appreciated, however, by those friends who had never thought to immortalize such moments.
In March 2006, in Paris, I could match in a single experience my professional interest in history and my passion for photography, which in fact I discovered around the age of eight with an old Zeiss Ikon AG Symbolica. I followed for several days the students’ protests against the bill on employment known as CPE, because I felt the need to document history as it was happening. I did not consider the technical satisfactoriness of my gear a problem, and I have not changed my mind about this. I used a cheap Kodak Easyshare C300. All in all, mistakes would not cost much with a digital.
On March 10th, when the student occupation of the Sorbonne started, I shot a picture of a girl who looked strangely familiar even though I was certain I had never met her. I did not stop thinking and went on shooting to document the various political demonstrations that seemed at the time the beginning of a new 1968. Later, going back home in the Marais, I discovered that the same girl I had run into with the tiny lens of my Kodak had been selected for the pages of the daily Le Monde three days before. This was a pleasant surprise, a single morsel that nourished both my pride as a historian of counter-cultural movements and my photoreporting artistic fancies. 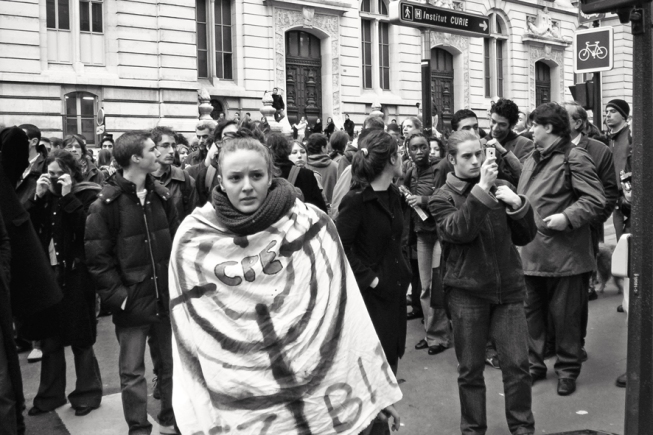 If I were to choose a snapshot marking my passage from hobby to profession, I’d say it is that b&w photo. From that day, I went hunting in the city – in cities – not just for historical documentation, but for a framing so effective that it would speak by itself and tell the story I had experienced without necessarily needing the help of words.
B&W had been an unconscious choice, partly due to all the time I had spent looking at family photo albums and my father’s old geography books, with Ansel Adams images. The main factor, though, was my passion for graphic novel art, Hugo Pratt’s Corto Maltese and Frank Miller’s Sin City in particular. My pursuit of professional framing was necessarily influenced by years of drawing China ink plates for comics when I was a college student. The ambition to obtain extreme – or hard boiled, if you like – b&ws passed through the distorting lens of comics, which allowed me in time – so they tell me – to develop a taste for paradox and surreal situations…and for challenging the rules of “good photography”, as I stick to low ISO even in precarious lighting conditions.

Entering “professional” photography only gradually – I think it’s best to keep a taste for play – I familiarized with the medium, preserving a curiosity to experiment with any sort of camera – new and old, second-hand or loaned. My idea is that the most important medium was given to me by mother nature, and it’s my eye.
I am a lover of street photography, though I prefer to call it straight photography. In fact, though, the first pictures I sold were rock concert photos, accompanying my articles for various music magazines. I still do that, but at a certain point it felt natural to move from the big stages to the streets, taking shots of buskers. Then my vision broadened, embracing the whole teeming life of Italian, European and North-American cities, without gender or ethnic distinction.
The rise of digital cameras and devices has obviously brought advantages – easier filing and indexing of materials, for example – and I have certainly never been inclined to entrench myself in the analog fortress. New camera technology has spurred some people to experiment to extremes; others have just tuned in to the new millennium, welcoming technological improvements and more and more portable cameras, this second aspect being the most important to me when I make my choices. I am adamant on one thing: print. I have always put my trust in professionals, in fine art printers like my friend Gian Paolo Daldello, to turn my visions into physical, tangible objects. Printing is definitely not one of my skills!